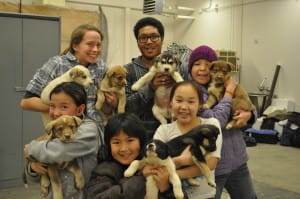 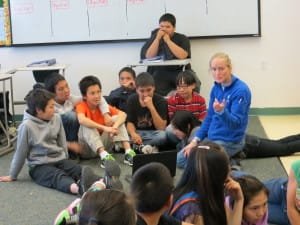 Dr. Wages talks to a group of children in Hoopers Bay, Alaska about veterinary medicine.

Over the course of the week, we set up a clinic in the school’s machine shop, where we spayed and neutered dogs, treated ear and skin infections, stitched up wounds, and removed fishhooks. We also went door to door through the village, vaccinating dogs, and praying with their owners. We loved on the village children, and gave presentations in the classrooms about dog bite prevention and care for dogs. We traveled to two nearby local villages, Chevak, and Scammon Bay, to reach out to as many people as we could.

The villages are very different from towns in the Lower 48 states. The population is over 90% Native Alaskan, with a very high poverty level. The villagers live on tribal property, in small government-provided plywood cabins, raised on stilts to protect against high tides, and heated with stove oil. Most of the villagers don’t have running water or indoor plumbing, and some can’t afford heat. The cost of living is very high, since goods must be flown in by bush plane or via a once-yearly ocean-going barge, with bread selling for $8 a loaf and milk selling for $12 a gallon. The villagers receive some government assistance for food and heating oil, but due to a lack of any western-style jobs in the village, most of them live much as their ancestors did, via subsistence hunting.

Christena, a tech at Care First Animal Hospital at Oberlin, poses with a native.

Like many native tribes, the Yup’ik have learned to struggle and survive in the harsh conditions of northern Alaska. They go berry picking in the summer (filling boats with berries to last through the winter), seal and whale hunting in the winter months, and moose hunting in the fall. Salmon is also readily available in the rivers and can be dried and stored. The other meats are frozen and stored. Every part of the animal is used. Intestines are made into raingear, hides are used for clothing and blankets, etc. Eskimo ice cream is always a favorite: berries fermented in seal oil, mixed with whale blubber, and then snow. While travel was traditionally by dog sled, with the convenience of snowmobiles and four wheelers, the dog sleds are not used anymore. You can order your snowmobile and it will come via boat on the yearly barge, or sometimes by air. Mail is delivered by bush plane to the villages. To some it might seem like a hard life, but to the Yup’ik, it is all they know and all they want to be a part of. Some people will go to the “lower 48” for schooling, etc, but then return to the villages where life is more “sane”.
In most of the villages the dogs run free and since very few are spayed or neutered, there are many litters of puppies born each year. There is no animal shelter in the village so when the stray population blossoms the dogs form packs, threatening the villagers and then the police sponsor Puppy Patrol. During this time hunters are paid to kill any animal not tied up at home, for a reward of $20-$40 a head. Because dog food costs upwards of $70 a bag, the dogs are mainly fed pieces of fish and game (goose, seal, moose, whale, fish). Unfortunately, most of the dogs have worms from the uncooked meat and are very thin. Many do not survive the winter and freeze to death. Very few dogs in the village live longer than three or four years. 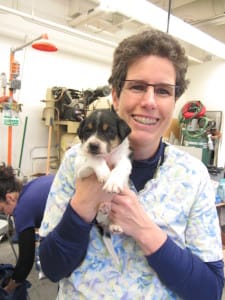 Our group was able to make some really good connections with some of the local people, teachers in the schools, church members, and the children. The children were fascinated by the surgeries and medical equipment. Most of the children had never seen a veterinarian and they were excited about the surgeries. Many of the kids dragged their dogs through a snowstorm to be able to watch them be spayed and help with the recovery.

The Yup’ik Eskimos are wonderful people, working daily for survival, much like their ancestors. There is much veterinary work and education to be done in the villages and we plan to continue our work with these people in the coming year. To make a donation towards our work with the Yup’ik Eskimo people, please click here and choose “NC Students” from the dropdown menu.