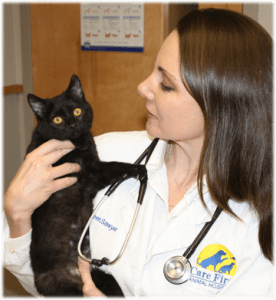 “I knew I wanted to be a vet since I was five years old.”  This is commonly heard among students that are interested in pursuing a career in veterinary medicine.  Often, it can be a little intimidating to those of us who didn’t know what they wanted to be at such a young age.  In fact, there are many who do not realize until much later in life their desire to be a veterinarian.  I am one of those people.

Even though I did not plan on being a vet, I always had a fondness for animals.  My Mom loves telling the story about a time when I was three years old and I brought a furry creature home.   I was petting it and saying “good kitty”.  Much to my mom’s surprise it was a dead rat!  (I did not realize this of course.) I also had many goldfish, tried to nurture countless baby cottontail rabbits back to health, attempted to incubate a robin’s egg under the light of my fish aquarium (it never hatched), and once rescued a baby rabbit that was about to be eaten by a snake (I’m sure the snake was disappointed that I took his meal from him).

I have always loved science, so I majored in Biology at Truman State University.  While in college, I enrolled in my university’s Army Reserve Officer Training Corps (ROTC). This meant a guaranteed job upon graduation!  This was great because I needed a break from school and had no other plans for a job.

In the Army I served in the Medical Service Corps.  It consists of officers that perform the administrative duties of the Army Medical Department.  It was a natural fit since I was very comfortable in the medical field with my biology background.  Although I really enjoyed it, after a few years I desired to further my education.  This resulted in researching many different graduate programs, most of which were in the healthcare field.  I seriously considered studying physical therapy, genetic counseling, being a  physician’s assistant, earning a master’s degree in immunology, and law school.  I even took an LSAT prep course!  I never completed the course because I got deployed to Afghanistan in 2002.

During my deployment, I participated in some humanitarian assistance missions with our unit’s medics.  The local villagers had very little; in fact many did not even have shoes.  Their houses were made of dried mud with the desert as the floor.  But they did have animals- mostly goats and chickens that they relied heavily on for their livelihood.  And then it clicked:  I could help both people and animals simultaneously as a veterinarian.  Veterinary medicine was the perfect marriage between my interest in science and medicine as well as my love for animals.

In order to obtain veterinary experience, I participated in the first Christian Veterinary Mission trip to the Navajo nation (with Page Wages- who was a vet student then)!  I then got out of the Army and moved to Raleigh to work in a veterinary clinic.  Debbie Gordon hired me at Care First Animal Hospital at Oberlin where I gained very useful technical experience.  I volunteered weekly with Dr. Bob Rednour, a large animal veterinarian, who was an invaluable mentor to me in equine and bovine medicine.  After a year and a half, I had enough experience to apply to veterinary school.  Of the schools that accepted me, I chose NC State because they had the best veterinary program compared to the other schools.  After graduating in 2009, I completed a small animal (dog and cat) rotating medicine and surgery internship at Virginia-Maryland Regional College of Veterinary Medicine.  Then I was hired back at Care First Animal Hospital, as a veterinarian this time!

It’s hard to believe that nearly 10 years ago I left the Army to pursue a career in veterinary medicine.  Although at times I miss the Army, I am truly blessed to be in this profession.  My favorite aspect of veterinary medicine is the privilege of helping both animals and people in their time of need.  I’m very happy being a vet- both veterinarian and veteran – and wouldn’t have it any other way.